Some lines about my encounters in Finland and Estonia – though possibly the best part of Estonia, my stay in Kilingi Nomme, I have yet to put in another blog. Also, some of the pictures (mainly from Jens) are still on my big camera, in my car, in a different part of Riga where I am writing today.

Finland had been an short but nice stay. I loved the weekend at Marja’s summer house (->last post), walking, talking and taking a Real Finnish Sauna. On top of that, I had the pleasure of meeting her old mother who asked me to put curlers in her hair to look beautiful the next day at the activity care. Also the city of Tampere, the glass factory in IIttala, the enchanting scenery of the hilly south and the pleasant hospitality of my friend Miia and her flatmates made my stay worth remembering.

I arrived in Estonia, Tallinn to be more exact, in the early evening on the 22nd of May, after a beautiful boat trip – eight hours shorter then the Stockhom-Turku line and free of the frightful army of drunken teenagers. I spent the day in Tallinn, strolling through the medieval streets where I bought some drawing material so I was more prepared to start talking to strangers. I met up with Marie, a young brave violinist and world cyclist from Tallinn, who was a bit sceptic about my ideas of talking to any strange Estonians (“Estonians are, well, quite afraid of people”). So we used my new pencils to draw our own ideas about growing older while listening to the medieval performance of her colleagues. 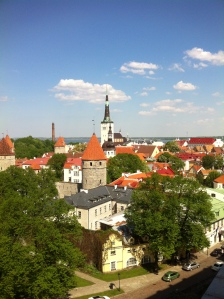 On Saturday I took the car -unfortunately not my debit card- to a place called Padise. Only two characters away from Paradise, I was welcomed by a mixture of Russian and Estonian hospitality, consisting of many many sausages and some warm home made socks. And more sauna, of course, this time accompanied by some Lithuanian mud and a bunch of cosy mosquitos.

On Sunday I drove South. Well, from now on, I will mainly drive South until I hit Greece in… August? After some time of seeing nothing but unspoiled nature, I suddenly passed this sign.  There’s no smoke without a fire, so I turned right just to find a well hidden, beautiful old house with quite a lot of old and/or disabled people sitting on the veranda. After some time of enjoying our mutual communication difficulties, one of the fairly moving veranda sitters went inside to dig up Jens from Hamburg.

Jens was 64 year old and the only German speaking inhabitant of the house. Why a 64 year old Hamburger, who never lived in Estonia nor doesn’t speak Estonian is spending his days in a state owned elderly home in the middle of Estonia: only god knows. I think I was his first visitor in the home ever (“Mein Sohn und ich, wir leben auf unterschiedligen Wegen”) and sitting on that veranda we had a nice, sometimes a little confusing but warm conversation. The birds (“Meine gute Schwalbenfreunde”) were chirping while Jens told me about his life, how he traveled the world as a sailor and about his passion: collecting music records. He also told about how he lost everything, including his music, the connection with his son – and my guess, probably some clarity- when his wife died in 2000. How he was happy to be in such a calm and peaceful place in Estonia, although sometimes maybe a bit too silent. 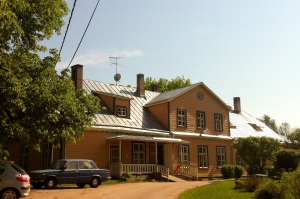 Jens showed me the house, an old place, with quite some people laying in their beds. Smelling, of course, of old life in an old building. Smiling and running nurses and well made tables with bread and milk, I could somehow understand that Jens didn’t mind spending his days in there. After all, it brings the certainty of a daily bread and a warm bed. With a smile on our faces, we said goodbye and with the promise of trying to send him a picture of himself with his friend Raúl, I left the premises.

This is a travel blog by Mees, who is wandering Europe's roads looking for stories on ageing.